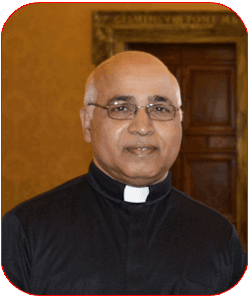 Sebastian Xavier Meleth was born in Kodungallur, Kerala, India. After school and university studies, he entered the seminary of the Oblates of St. Joseph in Kodungallur.

In 1984, he came to Rome. On September 14 of that same year he entered the novitiate in Este and on September 15, 1985, he made his first profession of temporary vows.

After his philosophical studies in Asti and theological studies a the Urbania, on September 24, 1989, he made his perpetual profession and was ordained a priest on June 14, 1992 in St. Peter’s Basilica by Pope John Paul II.

In 1993, he was named Secretary General of the General Curia in Rome. In the year 2000, he took part in the Fourteenth General Chapter and was named vice Treasurer General.

On April 4, 2006, he received in the ordinary meeting of the General Council at the Mother House in Asti, the offices of Treasurer General, Legal Representative and director of the Missionary Office and on February 5, 2007, he is a member of the council for economic affairs of the Congregation.