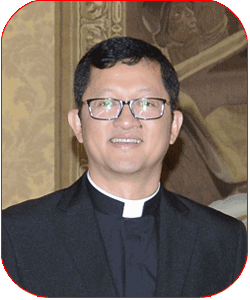 In 2000 he becomes Prefect and in 2003 Rector of the minor seminary of San Jose (Batangas) and in charge of on going formation in the province. In 2004 he is the Director of the schools of the Oblates.

In 2009 he is Pastor at Blessed Sacrament Parish South City Homes, (Binan, Laguna) and in 2010 third Councillor and Provincial secretary. In the same year he is nominated Rector and Pastor of the shrine of St Joseph parish Green hills, Mandaluyong city.

In 2013 he is Rector and Pastor in our Lady of the Most Holy Rosary Parish, Rosario, Batangas. In 2016 he is in Rome for the specialization in moral theology at Gregorian Pontifical University.

The XVIIth General Chapter (August 2018) elected him as 2nd General Councillor for the next six years from 2018 to 2024.