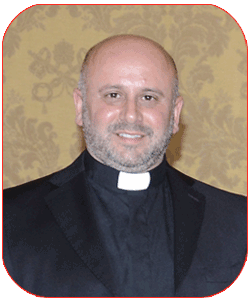 On 1st September 2000 he becomes Associate Pastor at S Maria del Campo e della Pieta, at Ceglie del Campo (Bari). Then, as the Prefect of the seminarians and vocation animator performs his activities in community of Crevedia Bucharest

In 2002 he is at Riccia (Campobasso) at the parish of S Maria Assunta, from 2006 at Ceglie del Campo. From 2003 to 2010 he is responsible of the Youth Apostolate of “Santa Famiglia” Province.

From 2011 to 2013 he is responsible in the province level of the Youth Apostolate and Spiritual Director at the Major seminary of Maria SS dello Sterpetto at Barletta. On 15 February 2013 he is nominated Superior of the “Santa Famiglia” Province (South Italy) for a period of three years from  2013 to 2016, and later renewed for another mandate.

The XVIIth General Chapter (August 2018) elected him as 3rd General Councillor for the next six years 2018 – 2024. And the general council elected hima as secretay general.