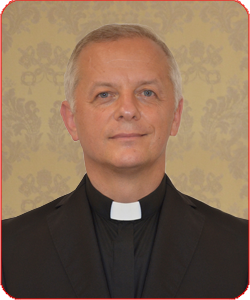 Fr. Jan PELCZARSKI was born in Poland, at Lipnica Wielka, on 4th December 1965. He made the first religious profession on 8th September 1985 and made the perpetual profession on 24th September 1989. On 29th June 1991 was ordained priest. His first ministry was as the chaplain of the Villa Aurora clinic of Rome. In 1992 he obtains license in moral Theology at Lateran Pontifical University and then he goes to Pittston (USA) for practicing English. In the same year he goes for mission in Nigeria, as the associate pastor in cathedral parish Holy Cross at Lagos. In 1996 he is the rector and procurator of the community of Lagos and in 1998 he becomes the administrator of the St Mary’s Catholic Church at Lagos in Nigeria. In 1999 he is prefect of clerics and postulants, vice master of the novitiate in the internationals study house of Rome in Italy.

In 2000 he leaves for the delegation of Bolivia and is nominated prefect in the major seminary Blessed Joseph Marello of Achumani La Paz and associate pastor in the parish of Our Lady of Guadalupe. In 2001 he becomes the Rector of the religious house of Achumani.

In 2002 he reaches Rome, in the General House and becomes the vice prefect in the international Study House and in 2004 prefect in the same house. He is transferred juridically from the delegation of Bolivia to the General House. In 2006 he obtains Doctorate in Spiritual Theology (Teresianum, Rome, Italy) with a thesis entitled La Cristologia vissuta di Charles de Foucauld (1858 1916). In 2007 he follows a Master’s Degree in bioethics, from Regina Apostolorum of Rome, Italy. Then he is transferred from the General Curia to Delegation of Bolivia (2nd August 2008), continuing to belong juridically to the General Curia.

In December 2008 he is the Rector of the community, formator in the major seminary Blessed Joseph Marello and associate pastor in the parish of Our Lady of Guadalupe in Achumani La paz.

In 2009 he is transferred juridically from the General Curia to the Delegation of Bolivia and in 2010 he is nominated Superior Delegate of the Delegation of Bolivia, for a period of three years (2010 2013). In 2012 he participates in the Mother House in Asti in the XVIth General Chapter. In 2012 he is professor of Moral Theology, anthropology and spiritual theology at ISET, San Jeronimo major seminary, la Paz