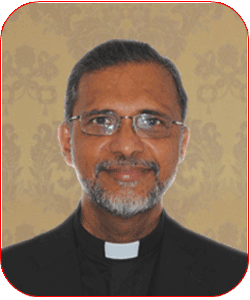 John Antony Attulli was born in Koonammavu in the Province of Ernakulam, Kerala, in India. After his studies at St. Philomene’s High School in Koonammavu, he entered the seminary in 1975 at St. Joseph’s minor seminary, Kalamassery.  He entered the novitiate of the Oblates of St. Joseph on October 4, 1981, in Pontremoli, Italy and made his first Profession on October 3, 1982. After his theological studies in the Pontifical University Urbaniana, Rome, he made his perpetual profession on August 25, 1985 and was ordained a priest on October 5, 1986 in parish of San Giuseppe all’Aurelio, in Roma.

He has been novice master, councilor, delegate and provincial superior in the St. Thomas Province, India.